Back to all posts

"It was her FRIEND'S Monkey!" (Myrtle Beach, SC)

So, if you've talked to me or seen a distinctly positive change in my demeanor recently, it's because I had myself a little vacation!  I went to New York City to do a taping for Comedy Time TV (which I'll blog about once it airs next month), and had an amazing time in Times Square.  It was magical!  I've always wanted to hang out somewhere that stayed up just as late as I did.  See I'm a night owl.  I'm the night owl who doesn't know it's time to go the f**K to SLEEP.  EVER.  I stay up way too late then I don't know what the hell to do during the early throws of what normal socially-adjusted sleepers refer to as "morning".  It's a pointless time.  Morning?  First of all, don't care for the name.  I don't want more of it.  I want less.  It should be called Lessning.  It lessens my sleep and my patience.  The sun is out, messing with my eyes when I'm tryin to sleep in.  Kids are up all over the world, watching Dragon Tales in 6 different languages,  playing, or worse, crying?  That sounds like the perfect time to be unconscious, doesn't it?  So that's what I TRY to do.  My whole life is at night, so why break my nature?...Oh well, so much for my positive demeanor...

The New York taping was on a Monday, and I had a show scheduled in Myrtle Beach, SC for Wednesday that same week.  So I FIGURED, why not get there a day early and just enjoy myself?  I had heard nothing but good things about Myrtle Beach, and after spending a couple days immersed in the culture there I can now confidently say they're ALL true!  What an amazing place!  Everything is lit up and stays open all night, which is perfect for night owls like me!  I hung out at the Boardwalk for hours!  Tons of people hangin out, enjoying the beach.  I personally have never cared for being out at the beach, but for some reason this night was different.  I wasn't scheduled to be anywhere or do anything.  So I decided to put my Flip camera in my pocket just this once.  I looked around, took a deep breath of fresh ocean air, took my shoes off to enjoy the sand sifting between my toes, and started walking.  I walked for a long time too!  That's when I found out something incredible:  I enjoy long walks on the beach.  That's a good way to define how unique I am actually.  I think they should make a facebook group only for people who enjoy that.  I know it might be small since it's a rare thing for people to admit about themselves, but I'm not afraid to be different I guess.  Trailblazer is a word that gets tossed around, but you know, I'm pretty modest.

SPEAKING OF MODESTY, I stayed at the Fountainbleau Inn next to the beach.  Never been in a place so small and cozy in my life.  It was a good small though.  Felt right.  I slept for 10 straight hrs that Mornight (Mornight.  New word I made.  It's when you make the daytime your nighttime, thereby making it your bitch for life, Avatar-style...Only a matter of time Webster)  I've never been to a motel where they give you the option of looking at the horribility of the room first before exchanging cash or finishing their paperwork.  It's like they KNOW you can do better, they're just waiting for you to figure that out so that they have less work to do.  But little did THEY know, I was only at this place because they were the cheapest (I knew they were the cheapest because I sat in their parking lot, turned on my garmin, and called all the motels in the immediate area using my BEST white guy voice that all black people use when they want to anonymously find out hotel rates...You think I'm joking?  Oh No, we DO that shit.)  They took my cash right then and there...plus a $10 key deposit...???  Not for a key CARD.  Just a janky-ass KEY.  I was thinking "Lady?  I just paid CASH for your crap room without a paper record of me being here for the night.  Your business practices leave NO room for trust issues at this point.  BELIEVE me, I'm coming back to give you your key.  I know it's the only one in existence, but trust me, it has NO street-value, you're safe!"...Not gonna lie though, I did get a little turned-on when I found out the television set flickered when I turned on the AC? So the higher I turned up the air the worse the picture got?!  WOO!!!  Thought about getting another key made just in case I wanted to sneak in that feeling again after check-out time.  That's just something you can't order at a 5-star hotel...

On a side note, quick horror story:   Walls were kinda thin there, so I heard someone knocking on a door really loud around midnight to the point I thought it was my door, but I was in the shower.  Then I came to my senses and realized there's no way in HELL this place has room service that late, so I ignored it, until I heard someone yelling "Alvin!  Alvin!"  I opened the door, and there was a guy knocking on another door.  He turned around and apologized for being so loud.  He thought they were the only ones on that side of the motel, and he was trying to get his friend's attention to come outside.  I informed him my name was Alvin too.  He informed me his friend's name was CALVIN.  Which sounds a lot like Alvin when you're in the shower in another room at midnight.  So with all that said, do you have ANY idea how scary it is to even think you're hearing someone bang on the door and call your name in a state you've never visited at a motel that no one knows you're staying at but you?!  You too will start having illogical fears such as these if you continue not to pay your bills on time.  I thought Wells Fargo had finally just HAD IT!...So now about the actual SHOW!...

After mornight was over I took a shower and headed over to the venue.  The Bay Watch Resort.  Here's the thing about hotel shows at fancy hotels:  You walk into the place, and your picture is in the lobby, at every elevator, at the vending machines and on flyers at the front desk.  Everyone walking around has seen your face (It's a reminder that location is everything.  Because your picture is up at a hotel, you're a celebrity.  If it were a Post Office, you're a criminal.  Such is life.  I'm sure other places have my picture up too.  Hell I bet by now my face is used as a screen saver at student loan collection offices around the country.)  They took great care of me from the minute I walked in at the resort.  Once I checked in I had a chance to walk around with the entertainment manager, Sean.  Great dude.  Loves comedy and respects the business of comedy, which I rarely see on the road.  We walked and chatted and he got around to telling me why he wanted to have comedy at the resort.  I asked him to repeat it for the camera:

So that girl I was teasing at the end of the video is named Blakely.  She was a member of a group who I have now affectionately dubbed The SuperFriends.  Blakely, Jenifer (not a spelling error, just one n), Yvonne, and Case (the guy who took the picture of us below).  Now, where do I even start with these women...﻿﻿
﻿
﻿
So the major theme during my show was that these people could not answer a very simple question:  "How did you all first meet?"  Every time I asked I got a very confusing answer that didn't quite address my inquiries about the origin of their friendship.  THAT'S because, as I found out after the show, two of them (who I will not disclose the identities of in exchange for the privilege to tell this story) had met randomly through some guy, who both of them were dating.  Not too out of the ordinary, right?  WRONG.
Turns out, they met through this guy because they were all going out at the same time together!  And when I say same time, I mean SAME ACTUAL  NIGHT!  This asshole was taking both of them out on the same date together, and telling them separately that he "invited his friend to come along with them on the date".  So every time these two women were on a date with their "man", they were both looking at each other wondering "Who's this other bitch he keeps inviting on all our dates?!"  I almost fell out of my seat.  I said "Wow!  I guess that makes you REVERSE Wiener-Cousins?!"  to which one of them replied "We actually prefer the term Semen-Sisters"...I actually did fall out of my chair laughing on that one.  Well played ladies.  Way to OWN IT!  As your reward, I have decided that the Semen-Sisters are allowed free tickets to any show I ever have anywhere in the country, and that is a promise!  No free travel though, you'll have to pay for that (You can save money if you carpool, which shouldn't be a problem since you two clearly have no issue sharing the same ride!  Hiyoooo!  HA!  Ok that was the last one, I SWEAR! :))
In closing, I cannot WAIT to come back to Myrtle Beach.  Blakely is going to take me Shark-Tooth Hunting, which according to her "Anyone who's Anybody does".  That's a good enough reason for me!  I think listening to her talk about the hunt is one of the greatest experiences that town has to offer.  That chick is hilarious!  Before they left for the evening I told The SuperFriends that the main thing I wanted to do is get back to that Boardwalk area and hang out again since it was the most fun I had all trip...That's when Blakely told me it was the hood.  I was walking around aimlessly in the hood of Myrtle Beach the entire time I was on vacation...Didn't know.  So with that in mind, I guess I can't wait to see what the NICE part looks like next time I come around! :)  Matter of fact, I've got my next trip planned out completely...

FIRST, shark hunting with Blakely of course that's a no-brainer.  Next?  I'm gonna make Case introduce me to this Double-dating Don Juan so that I may write a best selling novel about his conquests and share it with the masses similar to how I shared my 10 Commandments of Women (How cool is it that Case actually knows the guy?!  I still think it was him, I don't care what he says).  Yvonne will then tell me how she secretly executes mind-control over Case so that he continues to wear shirts that match her purse whenever they go out (Kudos Yvonne, Ku-DOS!).  And last but not least, Jenifer and I will have a chat, with no one around to pick on her about laughing too loud at everything I say, and I will listen to her explain to me what her family did with the other n in her name and how many friends she has probably missed out on simply because they can't find her on facebook.  Oh, and before I forget Ms. Sweat, I have a picture for you...

This is Chris Paul of the New Orleans Hornets. Turns out we DO look a little alike as you had mentioned.

Though I have been informed of much deeper resemblences in my lifetime: 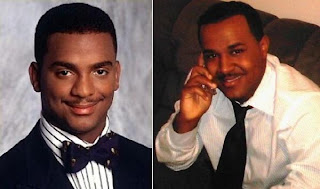